What is the most dangerous day of the year for drivers?

No matter how many preventative measures we take, we will always face a certain amount of danger in our day to day lives. Every time you buy something online using a credit card, balance your phone precariously on a ledge or head off on your daily commute, you open yourself up to a small amount of risk.

And when it comes to driving, this applies to both experienced and new drivers, as you can never really know what’s just around the corner. But although we can’t avoid these risks altogether, there are things we can do to minimise them – such as being extra careful if you find yourself driving on the most dangerous day of the year!

To help you stay safe on the roads, we’ve shared some of our research into the most dangerous day of the year for drivers.

What is the ‘most dangerous’ day for drivers in the UK?

Although there’s an element of risk attached to driving on any day of the year, our claims data showed that the 26 May is the most dangerous day for drivers, as this day had more motor claims than any other in 2017. Whether this be because it fell on a beautiful bank holiday weekend, or because there were just a few more people on the roads than usual, our research shows that everyone should be extra careful if they head off on a road trip on the 26th May!

What else did we find out?

Who made the most claims?

As well as finding out which was the most dangerous day of the year for drivers, we were also interested to know which demographic of drivers made the most claims in 2017. Unfortunately for 21-year-old male drivers, we found that they were most likely to be involved in road traffic incidents on Saturday 26 May than any other age range.

What’s the ‘most dangerous’ car?

Whilst Fords, Volkswagons and Peugeots all featured highly on the list of the ‘most dangerous’ cars, our claims statistics shows that owners of Vauxhalls were more likely to be involved in an incident. So if you’re a 21 year old male with a Vauxhall, you might want to stay alert if you’re on the roads on the 26th May!

Which is the ‘most dangerous’ region?

Drivers in the South East accounted for 19 per cent of all claims in 2017, making this the most dangerous region for drivers – however, the Midlands came in at a close with 17 per cent of claims made.

But on the bright side, our research also shows that Wales is one of the safer areas to drive in the UK, accounting for just four per cent of all claims made during the year. So if you’re planning a summer road trip, Wales could well be the safest destination! Here's a breakdown of our research below: 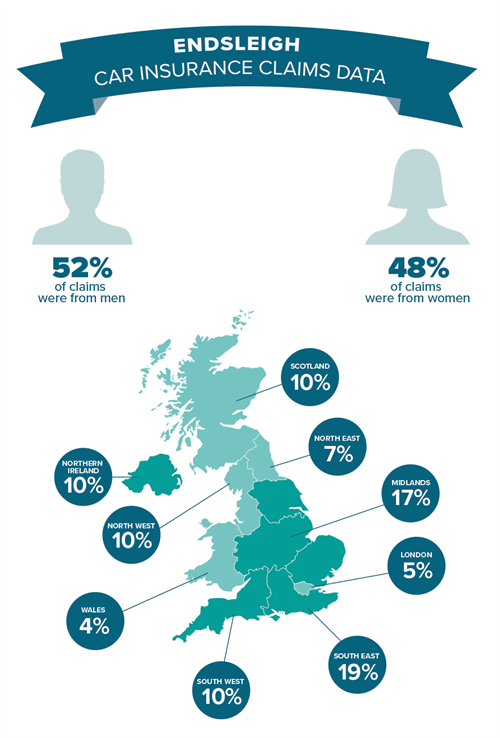 5 easy ways to stay safe on the roads

Even if you’re not out and about on the most dangerous day of the year for drivers, it’s still a good idea to take precautions on the roads, no matter which day it is.

If you’ve only recently passed your driving test, then it might be a good idea to consider enrolling on a Pass Plus course. Pass Plus is a scheme for new drivers to help them gain experience on the roads. The course takes a minimum of six hours to complete, and you’ll need a Pass Plus approved driving instructor for the certificate to be valid.

There are lots of reasons for new drivers to take Pass Plus, not least of which is to build up driving confidence. If you’re nervous about driving on motorways for the first time, for example, it can sometimes be useful to book in some extra time with an instructor to get used to the extra lane in a controlled environment. You might even find you enjoy your lessons more when you don’t have the pressure of trying to pass the initial test!

Stick to the speed limit

Whilst this might seem like common sense, it’s always worth reiterating the importance of sticking to the speed limit, as well as keeping a safe distance from other cars. Just a small reduction in speed could make all the difference if you were to be involved in an accident, and let’s not forget the fine and penalty points you might be subject to should you be caught by a speed camera or the police.

There are a number of things that could be classified as a distraction whilst driving, whether you’re checking your phone, playing your music too loud or perhaps having a mid-morning snack. The main thing to remember is that you should stay in control of the vehicle at all times, and the police can pull you over at any time if they think that you’re not in control.This could result in both a fine and penalty points on your licence, so it’s best not to risk it.

For more information about what counts as ‘distracted driving,’ please visit the government website.

It’s a legal requirement for your car to undergo an annual MOT if it’s over three years old, and your car insurance could be deemed invalid if you fail to get your car MOT’d at a registered garage by the anniversary date. The MOT is purely to ensure that your vehicle is road safe and meets environmental standards, and the garage should also provide advisory notes for areas of your car that you might want to keep an eye on – if your brake pads are starting to wear down, for example.

However, whilst the MOT will make sure your car meets basic legal requirements, this doesn’t necessarily mean that it couldn’t do with a service as well - especially during (and after) the winter months, which can take a heavier toll on your car.

As well as getting your car serviced regularly, it’s a good idea to give your car a routine health check, such as checking your coolant levels, before heading off of any long trips. You’ll also want to keep an eye out for dashboard warning lights on a day to day basis.

Even if you avoid driving on the most dangerous day of the year, accidents do still happen. That’s why it’s important to make sure that you’re fully protected by having suitable car insurance in place. The minimum legal requirement in the UK is third party only insurance. However, there are a range of car insurance options available, so it’s important to choose the cover that’s right for you.