10 things you didn't know your iphone could do

Having been around for a fair few years now, we’re all pretty familiar with the iPhone. But we've gotten lazy with iOS; we think we know it all, we’re all too familiar with our day to day swipes and presses and we use apps out of habit, ignoring new additions as they’re not part of the daily routine.

Let’s shake up that routine and discover new ways to use our iPhones that don’t take up more precious storage space; let’s get more out of our phones with very little extra effort and rediscover some lost tips that’ll hopefully remove a few of those every-day frustrations.

Here are 10 things you probably didn't know you could do with your iPhone.

1. Turn off music with the timer

Want to listen to music as you go to sleep but worried that your phone will be going all night? Or fancy working to music for just half an hour? You can set your music to turn off after a certain amount of time by opening the timer app and clicking the ‘when time ends’ dialogue box. Then select ‘stop playing’ and simply select the maximum amount of time you want to listen for.

Annoyed that you’re forced to go from left to right when taking a panorama? Simply tap the arrow when in panorama mode and the direction that you have to swivel on will change.

3. Save the battery, and your anonymity

Most iPhone users don’t realise quite how many apps and sites broadcast their location data on a daily basis. Not only does this compromise your location, but all of the broadcasting drains your battery life like no tomorrow. Go to ‘Privacy’ in your iPhone services and tap into the ‘Location Services Menu’. Rather than turning them all off, just turn off the apps you know you won’t use, so that Maps can still help you out in a bind.

If you constantly find yourself going into the ‘More’ section of the iPod music app then you’re doing it wrong. Simply tap ‘Edit’ in the same section and you can rearrange the quick links at the bottom of the screen.

Instead of scrolling like mad to get back to the top of a page, simply tap the top bar near the clock and the page will automatically scroll back to the top. iOS veterans may already know this tip, but for those that are new to the ecosystem it’s an absolute lifesaver.

This is absolutely essential if you want to avoid networking awkwardness. Go into the Settings app, then into the Messages pane and make sure to turn ‘Read Message Receipts’ off. This prevents people from knowing that you've read their message, but were too lazy to respond, freeing you up to mull over your reply.

8. Make the battery last even longer

It’s really tempting to plug that iPhone in at every possible occasion, but a better idea is to completely run down the battery before charging it up all the way to 100% again. This re-calibrates your battery and makes it last that little bit longer due to getting quality charges rather than brief spurts of energy that’ll quicken the battery’s degradation.

There are several productivity hacks inherent whenever you use the keyboard; a really useful one is to double tap the space button once you've finished a sentence and it’ll put in a full-stop automatically, saving you from transitioning to another menu. Also, if you keep your finger pressed down on the shift button, then drag across to the letter you want capitalised, it works in the same way as two taps - and is often quicker.

This was a huge feature when it was finally added, but most have already forgotten it; instead of awkwardly holding the phone so that you can take a picture using the touch screen, you can simply press the + button on the side instead.

Here’s an added bonus that’s great if you want to mess with other users: open the Settings app, go into General and click on the Keyboard option. Here, you can set keyboard shortcuts by phrase or acronym, meaning the iPhone will type the key phrase whenever you type whatever acronym you set. You can really annoy other iPhone users by inputting some common words as shortcuts and having the iPhone spit out some antonyms or rude variants. Give it a go!

Stay connected when it matters most. Save up to 15% when you insure 3 or more gadgets, with 24 hour replacement within one working day of your claim being approved. 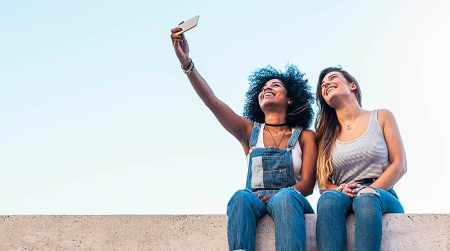